About a year ago, Anguel and I sat on an airplane with our winter coats stuffed in the overhead bin - and two equally fluffy kittens tucked under our seats. It was one of those fully-booked flights where the seats seemed to have shrunk, the babies on the plane weren't having the best of times - and one of those kittens we brought along for the ride decided to meow for the entire 5 hour flight (not cool, Forrest). I probably would have been more embarrassed had I not been distracted by processing the magnitude of that moment. We were leaving a life we built together in Toronto – one filled with amazing friends, Anguel's small but amazing family, and a loft apartment with amazing exposed brick walls we still dream about.

Moving back to Vancouver was something I'd always wished for. But life has this funny way of just whizzing by, presenting you with one opportunity after another and before you know it, you find yourself waking up in a completely different place than you started. My timeline to move back kept growing hazier and hazier over the years, as I became ever more distracted with an amazing job, a great group of friends and a restaurant hit-list that was destined to bankrupt me.

It wasn't until a family vacation over the holidays that we started to truly consider whether it was time. When was the right time? Would it ever feel like the right time? Despite having no family and few friends out on the west coast, Anguel was the biggest supporter behind the move. Fast forward a couple months, and I was finally coming home for good, and this time, I had my best friend coming with me.

When I think of apples, I think of Anguel. He's endearingly known in my family for being an apple monster. The dude takes "an apple a day" to an entirely different level. My grandma doesn't speak English very well (although I swear it's better than she lets on), but she quickly noticed Anguel’s aggressive apple consumption and now shows her affection for him by gifting him apples. Whenever we see her, she always hands over a big bag picked specifically for him (...don’t act like your family isn’t weird too). And my mom does the same. I guess the apple doesn't drop far from the tree.

Thankfully I’m able to convince Anguel to share some of his apples for this recipe. If there's one thing he'll trade for apples, it's probably ice cream. We've had our ice cream maker for a few years now, and dairy-free ice creams became a fast favorite in our home. Until recently, I hadn’t really put fruit in my ice cream – because I find the water content tends to make it quite icy (especially when dealing with vegan ice creams). Thankfully, apples take well to cooking, which allows you to cook out some of its moisture content. Pair that with cinnamon and nutmeg, and you have a match made in heaven - one that will truly remind you of an apple pie. For a bit of crunch, we like to top the ice cream with a delicious cinnamon oat crumble, which is also a clever way to sneak in the leftover apple peels! It's magic. You kitchen wizard, you.

The toughest thing with vegan ice creams is getting the texture to work out: it should be creamy, not icy. The first step to accomplishing this is to remove some of the moisture from the apples through cooking. You'll also need full-fat canned coconut milk. Light coconut milk or alternative nut milks have too much water and not enough fat to get a creamy ice cream. The other two tricks include arrowroot powder and alcohol to help us accomplish creamy-goodness. Arrowroot powder, much like cornstarch, thickens liquids. Lucky for us, arrowroot is supposed to outperform cornstarch in frozen dishes (for a detailed comparison, read this). If you haven't used arrowroot before, give it a shot – it works wonderfully in recipes where you need a pudding-like texture, like this coconut cream pie. The alcohol trick was something I read a while back, and it makes total sense. We didn't have any neutral tasting booze on hand, so I opted for a generous serving of vanilla extract instead. I make my vanilla extract by steeping vanilla beans in vodka – but if you're using a store-bought version just make sure to check the label to confirm it includes alcohol.

It's very important to chill the ice cream base before running it through the ice cream maker. Otherwise, the mixture will be too warm and it won't be able to properly set. That said, after this step, our self-control with this ice cream is pretty questionable. Usually we'll do some "taste-tests" directly out of the ice cream machine, while it's still in soft serve form. By all means, enjoy it this way. But if a fully frozen ice cream is what you're after, transfer the mixture to a container and store in the freezer. As with most homemade ice creams, they become more scoopable once they’ve had time to thaw on the counter. So, after you've stored the ice cream overnight, plan to let it thaw for at least 15 minutes before serving. Sprinkle with a generous serving of cinnamon oat crumble and enjoy! 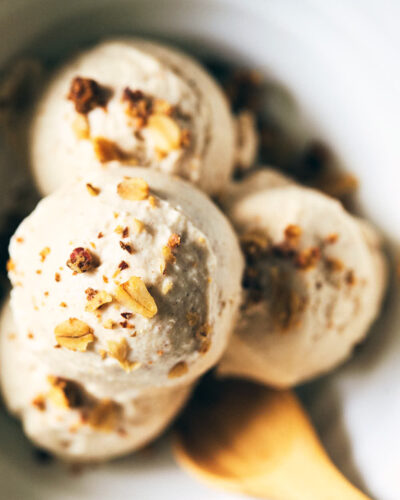