A rich, creamy plant-based ramen. The luscious vegan broth is full of flavor, thanks to a few flavor-maximizing techniques. The next time you're craving "real deal" creamy (vegan) ramen, make this recipe. It's umami in a bowl.
Jump to Recipe

For years ramen has topped our list food we miss most since ditching meat. Finding a good ramen joint can feel like tracking down a needle in a haystack. But finding one that serves plant-based broth? Ha. Cue the waterworks. So as I’m sure you already suspect, we’re here to tell you that homemade is the way to go. And better yet, you’re less than an hour from the vegan ramen of your dreams!

One of the first “fancy” dishes I made when Anguel turned vegetarian was Kenji’s ramen. The dude is a genius, so as expected, it tasted great. On the downside, it turned out to be a very late dinner: thanks to 3 hours of cooking, 25 ingredients, and the borderline insane number of components. So for practical reasons I’ve yet to make it again. But years later, we still have ramen on our mind, so it was time to roll-up my sleeves and develop a simpler version that's still loaded with plenty of flavor. And after many rounds of testing, it’s finally ready to share. This Creamy Vegan Ramen has a rich, sumptuous texture and delicious umami flavor. And you won’t need to spend all day in the kitchen making it.

When it comes to ramen, the broth is really the most important part, no matter what anyone tells you. After much tinkering, I can’t help but feel like a kitchen ninja making this broth, and I hope you do too. While using store-bought vegetable broth might seem like a good idea, I promise you it won’t result in the flavor that ramen shops have on tap. Your best bet is to make your own; and this version is a lot easier than you might think. In this recipe there are three key steps to drawing out maximum flavor in the minimum amount of time. Let’s get started.

The first step is broiling the aromatics for the soup base. A quick trip to the oven starts caramelizing the vegetables, helping to add deeper flavor to the broth. You’ll want to keep the onion and garlic skins on, because surprise, they have a lot of flavor too! Then comes step two: the mushrooms. My early versions included boiling dried mushrooms and then straining them out of the broth at the end - you know, standard stuff. But then I got this crazy idea to grind the dried mushrooms into powder. BOOM, it was a game changing move. The homemade mushroom powder seamlessly mixes into the broth so there’s no need to strain out the mushrooms at the end. And, because the mushrooms are still technically in the soup, their flavor is more pronounced - even after minimal cook time on the stove. I never thought I’d get so excited about pulverized mushrooms, but I guess there’s a first time for everything. The third step is blending the hot soup broth with the cooked garlic and toasted sesame seeds. The garlic adds a luscious flavor to the broth and a couple spoonfuls of sesame seeds mimic the traditional Asian sesame paste that’s often added to ramen. It’s also a healthy source of fat, and together they create the luscious mouthfeel we love in a good ramen (without the meat and bones, of course).

In developing this recipe, I wanted to minimize the need to track down tricky ingredients. Most standard grocers stock dried shiitake mushrooms. If not, you’ll definitely find them (for cheap) at an Asian grocery store. We tested many different types of mushrooms in the broth and shiitake was by far our favorite. For ramen noodles, you can either buy the fresh kind or dried. The dried noodles may be sold on their own, or with little flavor packets (which you can throw straight in the trash because they’re usually loaded with junk). For a gluten-free option, you can use something like these dried ramen noodles. Our local Costco used to stock them - and the short and simple ingredients list gets our thumbs up. And lastly, we think ramen is best served with a small scoop of chili garlic oil on top. It also happens to double as an easy flavoring for the baked tofu. You can buy this from an Asian grocery store, but we find this 5 minute homemade version to be much more convenient and delicious (plus, it means one less jar to clutter the fridge). 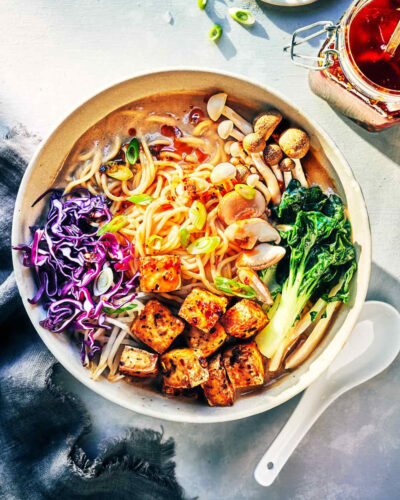