One-bowl brownies that won't guess are gluten-free and vegan! These brownies are fudgy and decadent, thanks to three kinds of chocolate and a "secret" ingredient you likely have at home. No fancy gluten-free or vegan ingredients needed.
Jump to Recipe

We’re lucky to live a block away from one of the best known bakeries in the city. It’s a tempting stop on our way home from weekend errands; but no matter how many times we visit, I still get overwhelmed each and every time I walk in the door. There are baked goods heaped on plates, stacked on cake stands and laid out in boxes - covering literally every surface from the entrance to the checkout. For someone who usually wants to try one of everything, ordering can feel impossible.

Case in point: On my last visit, they had four types of brownies. FOUR! I leaned over glass, lowered my voice, and asked “so which brownie is actually the best?”. I hoped the staff member would save me from my misery and point me to the best brownie of them all. But, this was not the case. After getting the runaround (“they’re all the best!!!”, she said), I aborted the mission and settled on a savory muffin instead. But later on, I still couldn’t shake the idea of chocolate brownies out of my head, so I had to make a batch at home…

...fast forward one week, and I’ve now eaten so many brownies that I’ve stopped counting. But on the bright side, I landed on some deliciously fudgy brownies that made it all worth it. The brownies are both vegan and gluten free. And it’s not the kind of gluten free recipe that requires you to go out and buy a bunch of wacky ingredients - or hope that miraculously your store-bought flour blend will work out exactly how the recipe was tested (rarely ever does). Nope, these brownies use pretty simple, whole ingredients. No weird gums or additives required. And to save on cleanup, you’ll only need one bowl (or technically a pot, but you get the point).

In other words, you should be making these brownies right now. They’re rich and decadent thanks to three types of chocolate: melted chocolate, cocoa powder and chocolate chunks. The combination makes them uber chocolat-y, which is kind of the point of brownies, no?!

To elevate the chocolate flavor even further, the "secret" ingredient is strongly brewed coffee. Coffee and chocolate are a natural pairing. And while these brownies don’t taste like coffee, the addition really helps round out the flavors in a subtle way. We often have some leftover cold coffee sitting around after we make a batch, so it’s an easy way to use it up without wasting it. Otherwise, simply brew about a tablespoon of coffee grounds in one cup of hot water. Let it steep and cool down slightly, then use in the recipe. If you’re avoiding coffee, you can substitute with an equal amount of nutmilk, but if you can, I highly recommend going the coffee route. You won’t look back.

One-bowl brownies that won't guess are gluten-free and vegan! These brownies are fudgy and decadent, thanks to three kinds of chocolate and a "secret" ingredient you likely have at home. No fancy gluten-free or vegan ingredients needed.
Prep Time 10 minutes
Cook Time 25 minutes
Total Time 35 minutes
Servings 16
Author: Bri 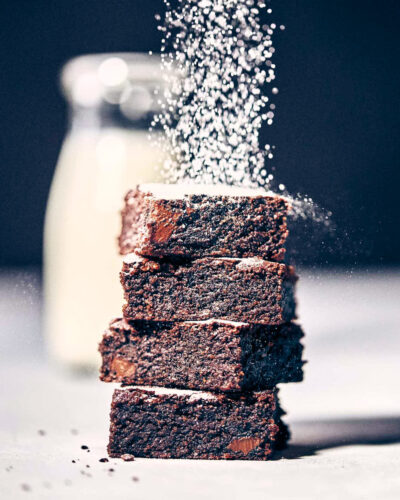