Celebrate the holidays with a gingerbread house that's made entirely of cake! Features layers of moist gingerbread cake, vegan chocolate buttercream and spiced gingerbread cookies. A show-stopping dessert that's sure to impress.
Jump to Recipe

On Christmas day, many years ago, I tried my hand at baking for the first time. It was the early 90’s and the Easy Bake Oven was in its heyday. That morning I unwrapped this shiny hunk of plastic, with enough hot pink detailing and well-placed stickers to convince any kid that this was the real deal. From that day on, I was hooked.

My mom loves to tell me how I went on a relentless tear whipping up brownies as dense as hockey pucks, and vanilla cakes that could last years without spoiling. I was so immensely proud of my light-bulb “baked” creations that neither she nor my dad were going to burst my bubble. At least not then, anyways.

Thankfully, these days I’m all about holiday treats that are actually edible. And naturally, this brings me to the topic of gingerbread houses. So often g-bread houses consist of stacks of inedible cookies and rock solid icing - which when combined have at least a 70% chance of chipping a tooth upon contact. Not my cup of tea. Gingerbread houses made of CAKE on the other hand? Now we’re talking.

I first made a version of this cake about 10 years ago, when I spotted the idea in (what I think) was a Martha Stewart magazine. I’m sure it contained pounds of butter and white flour...but the idea, it was genius. My variation features three mouthwatering components: moist and decadent gingerbread cake, fluffy chocolate buttercream icing and spiced gingerbread cookies. All three are completely vegan, with no refined flour or added refined sugar (but you’d never guess it!). In the spirit of full transparency, this recipe is no walk in the park. I mean, you’re building a house out of cake...but if you’re up for it, the end result is an entirely edible showstopper.

There’s A LOT to say about this cake, but it’s the holidays and I know you don’t have time to be dawdling. Let's quickly talk about the vegan chocolate “buttercream” though, because it deserves the airtime. I wanted to create a decadent frosting that didn’t rely on vegan butter. Because that stuff scares me. So instead this chocolate frosting starts as a modification to coconut whipped cream. I then took it one step further to get a fluffier and less dense frosting. The trick? Aquafaba. If you still haven’t heard of aquafaba, know that it’s the liquid in a can of chickpeas. It can be used as a substitute for egg whites in baking, and can be whipped to stiff peaks (seriously). The trick to a fast whipping aquafaba is to reduce it over the stove first. This allows some of the excess water to evaporate - and cuts big time off the beating process. Once combined, the “bean-y” taste entirely disappears (yes, actually) and you’re left with a bowl of the soft and fluffy chocolate vegan frosting.

For those of you that are embarking on this holiday cake adventure, know that the recipes below are extensive to help illustrate every step of the way. Anguel even made a GIF to show how the cake gets assembled. If you have any questions, please feel free to leave it in the comments. Happy holiday baking my friends! 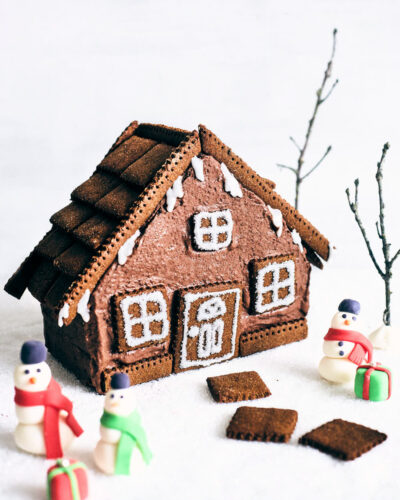