This satisfying veggie sandwich is stacked high with marinated mushrooms, caramelized onions, roasted beets, goat cheese, and crisp veggies. Because who said vegetarian sandwiches had to be boring?!
Jump to Recipe

When it comes to sandwiches, the magic is usually in the fillings. These delicious veggie sandwiches are loaded with balsamic mushrooms, caramelized onions, roasted beets, fresh veggies, goat cheese, and protein-rich hummus (or Creamy White Bean Spread). The fillings tick all the boxes: savory, salty, creamy, tangy, and crisp. So if you love tasty and satisfying vegetarian sandwiches, look no further!

While there are a few components involved, they can be easily prepped in advance. We often make a double batch of fillings so that we can make hearty sandwiches throughout the work week. Or, you can meal prep extra caramelized onions, beets, and white bean spread (or hummus) to use for other meals. Either way, you won't regret it.

Here are some sides that pair well with these mushroom, beet, and goat cheese sandwiches: 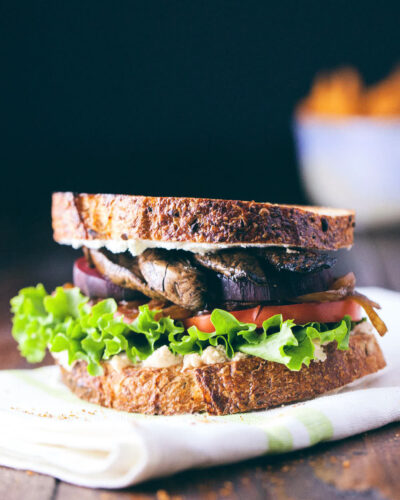