This pierogi dinner is perfect when you're short on time. Frozen pierogi (perogies) get spruced up with sauteed onions and bell peppers, and plant based sausage for protein. This delicious and comforting vegetarian meal comes together in 25 minutes— with just 5 key ingredients. (Vegan option)
Jump to Recipe

Frozen pierogi (perogies) are a shortcut to quick and delicious dinners. They're inexpensive, keep well in the freezer, and cook in minutes. Mainstream grocery store pierogi brands even tend to have a vegan friendly option!

On busy weeknights, we'll usually turn frozen pierogi into a satisfying vegetarian dinner by adding colorful veggies and plant based sausage. All it takes are a handful of ingredients and less than 30 minutes to make this delicious and comforting meal.

Pierogi are Polish dumplings made with a soft dough wrapped around fillings. There are many different pierogi fillings, but it often includes potatoes and cheese. Pierogi are commonly served with fried onions, lardons (small cubes of bacon), and sour cream (source).

We almost always have a bag of frozen pierogi in the freezer, because their convenience can't be beat! While pierogi can certainly be enjoyed on their own, we like to jazz up frozen store-bought pierogies for meal time. Our spin on a vegetarian pierogi dinner involves sauteed vegetables (for flavor and color), plant based sausage (for protein), and sour cream (for dipping).

Our vegetable of choice here are bell peppers. They're a crowd pleaser—even with picky eaters—and they get silky and delicious when browned in the skillet with onions. We usually keep a package of vegan sausages in the freezer. They're an easy way to add tasty protein to meals (like pasta). Since we're reaching into the freezer to grab a bag of pierogi, you might as well add some sausage while you're at it!

Here's the complete list of the ingredients you'll need to make this recipe:

How to make this recipe

This recipe comes together in a single skillet pan, which saves on dishes and ensures not a drop of delicious flavor is lost.

It starts by sauteing onion and bell peppers in a skillet until tender, then nestling in plant based sausages. Cook everything until it's juicy and golden brown. Once the sausages and veggies are cooked, set them aside while you pan fry the pierogi until crispy and golden brown. The last step is adding everything together in the skillet and letting it cook for another minute or two. We highly recommend serving this pierogi and sausage dinner with a side of sour cream for dipping!

We recommend using a nonstick or well-seasoned skillet for this recipe. Something where you won't have issues with the pierogi sticking to the pan. If using a seasoned cast iron skillet, the pan will get hotter throughout the cooking process, so you may need to reduce the heat slightly to prevent burning. To read more about cooking with cast iron, check out these resources:

There are many ways to cook pierogi, including (but not limited to):

This recipe was developed using the pan fry method, so that the onions, bell peppers, sausage, and pierogi all get crispy and golden brown. For simplicity and speed, we cook the frozen pierogi directly in a skillet pan. It what the package recommends for the brand we buy—and it cuts down on cook time and dishes.

If you prefer, you can boil then pan fry the pierogi. To do this, bring a big pot of salted water to boil. Drop in the frozen pierogi and let cook until they float to the surface, about 3 to 5 minutes. (This step can be done as the onions and peppers are cooking). Drain the pierogi then cook them in the skillet as directed in step 3, but reduce the cook time by a couple minutes. Once the pierogi are golden brown on the exterior, they're done!

How do I store cooked pierogi?

Once the pierogi are cooked, refrigerate in an airtight container for 2 to 3 days.

How do I reheat pierogi?

We prefer to reheat pan fried pierogi in a lightly oiled skillet over medium-low heat. Covering the skillet with a lid for the first few minutes helps the filling heat through quicker. Alternatively, you can reheat in the microwave in 30 second increments.

How do I make this recipe vegan or dairy free?

It's easy to make this recipe vegan! Simply use oil or vegan butter for cooking, choose vegan frozen pierogi, and either use vegan sour cream or omit (the sour cream is optional!).

This pierogi dinner is perfect when you're short on time. Frozen pierogi (perogies) get spruced up with sauteed onions and bell peppers, and plant based sausage for protein. This delicious and comforting vegetarian meal comes together in 25 minutes— with just 5 key ingredients. (Vegan option)
Prep Time 5 minutes
Cook Time 20 minutes
Total Time 25 minutes
Servings 2
Author: Bri 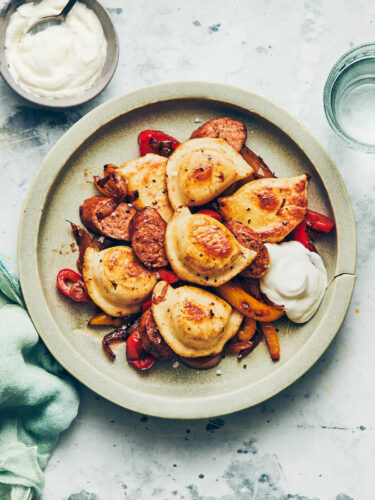 Check out these other crowd pleasing dinners: