Crisp pumpkin pecan biscotti is perfect for dipping into a hot cup of tea or coffee. These vegan biscotti are made with almond and spelt flour. Since biscotti keeps well, they make tasty gifts for loved ones over the holiday season!
Jump to Recipe

As the fall weather starts to roll in, I've suddenly developed the urge to slow down. The summer flew by quick - as it always does - filled with spontaneous weekend adventures, countless laughs with friends, and the optimism that I had the energy to do it all. But now, as the air gets crisper, I feel like it's time to take a deep breath and reset. My first attempt at a "plan free" weekend was last week. After a long overdue sleep-in, and once the kittens had gotten their fill of cuddles, I meandered into the kitchen to make my morning tea. I should stop here and thank my kettle. It gets a lot of action at home – and for that, I'm forever grateful. But, the one thing it can't do (yet) is dispense yummy baked treats to enjoy alongside my many daily cups of tea. Something I was very much craving on the weekend.

Biscotti seemed like the perfect fix: it's firm enough for dunking into hot drinks, has just enough sweetness to feel indulgent, and it keeps for at least a week or two. In all seriousness, you and I both know that nobody has trouble finishing off baked goods in that amount of time...but at least you don't need to feel pressured to inhale all the cookies at once because they'll lose their freshness by like, tomorrow.

Until recently, biscotti has always intimidated me. I'm not sure if it's because it's the fact they're sold at fancy coffee shops, their unusual shape, or because of the slightly exotic sounding name - but whatever it is, when I think of baking, I don't usually think of biscotti. This recently changed after Anguel and I stumbled on an episode of Bake with Anna Olson. I'm not super familiar with the show, seeing as we don't even have white flour or white sugar in our kitchen - but she did show us how easy it was to make biscotti. The most complicated part? Baking it twice - not intimidating at all! Coming up with a reliable and delicious biscotti recipe with healthy ingredients, from scratch? Slightly intimidating. But, I was determined to do it, and after a handful of batches I'm confident to say this one's a keeper.

Since everyone's already gone pumpkin-crazy by this time of year, I felt like it was appropriate to make pumpkin-flavored biscotti. The results are delicious! The pumpkin pairs beautifully with cozy spices like cinnamon, ginger, cloves and nutmeg. And the dark chocolate drizzled on top? Always good.

Traditional biscotti gets its crunch from blanched almonds. I chose pecans instead, because they're a great complement to all the fall flavors of pumpkin and spice. Not wanting to omit almonds completely, I incorporated them in the form of almond flour in the base of the dough. Adding almond flour was the trick for getting lighter, more buttery tasting biscotti. And the spelt flour helps keep it all together - plus, since almond flour can burn easily, it improved consistency and reliability during baking (especially since it's baked twice!). And, because I wanted as many people as possible to enjoy these tasty morsels, this recipe is vegan.

The process for baking biscotti is really easy. Once you get the hang of it, I bet you'll be baking up biscotti like nobody's business - especially when the holidays hit. After your dough is mixed, you'll need to shape it into two long logs for the first bake. After the first trip to the oven, the outside of the dough will have turned a lovely golden brown. The next step is slicing - but make sure you let the dough cool first. This part is key! Usually after about 20 minutes they're cool enough to handle but still slightly warm inside. This is exactly what you want - if you let them cool too long, they can get difficult to cut. Use a sharp serrated knife when cutting. You can choose how big you want your biscotti to be. If you want big, long biscotti (like the coffee shops), you'll want to cut at an angle for longer strips. I kept mine more "snack size", so I did straight cuts across the short end of the log. Handle the pieces carefully to avoid breaking, and place on a baking sheet for the second trip to the oven.

Since biscotti aren't usually super sweet, I like to have a bit of chocolate goodness on top. I opted for a decadent homemade vegan chocolate drizzle to decorate the biscotti. Melted store-bought chocolate works just fine. White chocolate would be another great option as well (but typically not vegan). 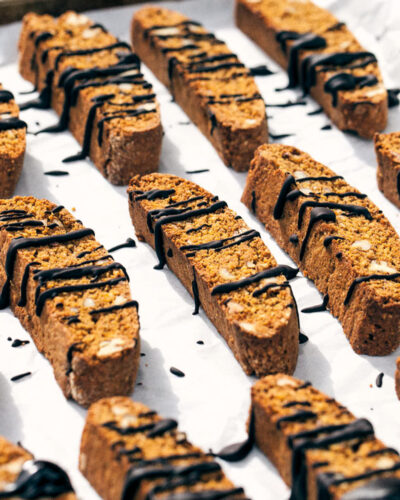