During the fall and winter months, pumpkin spice is a must. It's hard to beat creamy pumpkin and fragrant cinnamon—especially when it's served with a dollop of whipped cream! These pumpkin pie parfaits channel the flavors of pumpkin pie, but without needing to make an actual pie. Slightly sweet pumpkin filling is layered with fresh dairy-free whipped cream. Crumbled ginger molasses cookies make a delicious stand-in for pie crust. And because the components can be made in advance, you can simply assemble personal-sized portions whenever you want. Or serve during the holidays and let everyone assemble their own.

The idea for these pumpkin parfaits came from Ina Garten. I was flipping through her cookbook Barefoot Contessa at Home and the festive Pumpkin Mousse Parfaits caught my eye. Her original recipe has lots of whipping cream, egg yolks, and gelatin—so I wanted to make a healthier version that's also vegan. The results are delicious!

These pumpkin pie parfaits come together quickly. There is no baking involved and the fridge does most of the work. Here's how you make these parfaits:

If you want to keep the crumbled cookies as crisp as possible, then assemble these pumpkin pie parfaits just before serving. You can assemble them in small glasses, mugs, ramekins, or anything other small container you have on hand. For an easy, casual dessert just bring the components to the table and let everyone serve themselves.

Extra pumpkin filling and extra whipped cream can be covered and refrigerated. Store cookies at room temperature. If you have extra assembled parfaits, cover them and store in the fridge. 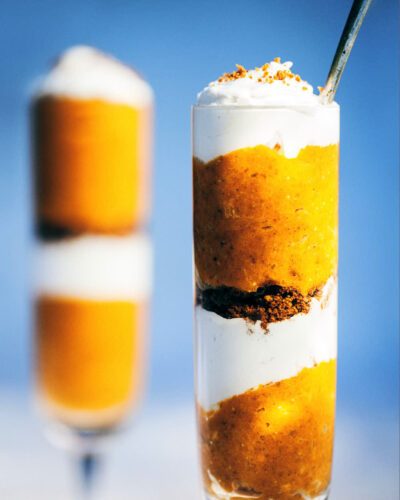