I've got some pretty exciting news. Come next month, I'll be starting a new job! The change has me saying goodbye to an amazing team that I've worked with for the last handful of years (sad face). Although at the same time, I'm really looking forward to joining a stellar crew in my hometown of Vancouver. And given that some of my old colleagues are now some of my closest friends, I know they're never more than a phone call away. So overall, it's good feels all around!

On one of my final work trips back to Toronto, a colleague of mine commented on my calm demeanor. Given my job, I took it as a pretty nice compliment. Deadlines are tight, clients can be demanding, and the pressure can sometimes boil over (inevitably). Years ago, there's no way I would have expected "calm" to be a word someone used to describe me. But here we are. Frankly, I'd be kidding myself if I agreed that I am always calm. Often times, I still feel like a new swimmer treading water: shoulders and head are calmly above the surface, but underneath, two legs are furiously kicking away to keep everything afloat. The kicking isn't so much flailing or panic, but rather a constant stream of thoughts. A list of to-do's, things to remember, e-mails to return, phone calls to make. It goes on and on, and it rarely slows down. Over the years I've found ways to quiet these voices…things like hiking, yoga or just chilling the heck out. But the thing that works best for me – and I've known this all along – is cooking.

This recipe isn't the fastest thing out there, but it's one of the most cathartic recipes in my repertoire. Whenever my mind feels full of thoughts, I like to make dishes like this. Things where you can go through the motions without thinking too hard. Where you can nibble along the way. And ultimately, where the product is a comforting dish that you could dive into, face first.

While tomato tarts definitely aren't new or revolutionary, it's taken me a lot of trial-and-error to get one that I'm fully happy with. Almost a month to be exact. Not kidding. Although, I was totally up for the challenge because the combination of ripe tomatoes, soft cheese and fresh herbs makes me weak at the knees. That and I've noticed a lot of common let-downs when it comes to tomato tarts. Things like soggy crusts, watery fillings or a tomato flavor that's less than all there. And when tomatoes as beautiful as these are in season – why settle for anything less than exceptional?

I started with one of my most popular recipes on the blog: the sunflower seed crust from this quiche recipe. After a couple minor tweaks to account for the different fillings, I'd say it makes for the most perfect base. I ended up bumping up some of the ingredients to get a thicker crust, which helps it hold up nicely after being filled with cheese and topped with tomatoes. Par-baking the crust, prior to adding to filling, is a pretty critical step in my opinion. It helps the crust firm up and brown on the inside. In other words, it's key to avoiding a soggy crust.

But perhaps the biggest revelation when developing this recipe was the two-step baking process for the tomatoes. The first time I made this, I ended up putting raw tomatoes directly on the tart. To be fair, I dried them off a bit beforehand. But regardless, I quickly learned that because tomatoes are quite watery, they'll continue to release water during the baking process (especially when they're juicy and in-season). And that's a definite no-no if you want a thick, creamy filling. To prevent a watery filling, I first roast the tomatoes in the oven, prior to layering them atop the tart for a second bake. Sure, the second step adds a bit of time to the overall baking process, but in the end I'm confident you'll agree it's worth it. And, since you can bake the tomatoes at the same time as the crust, it really isn't so bad after all.

Once the crust is baked and the tomatoes are roasted, you'll fill the tart with a creamy blend of goat cheese and ricotta. Fresh basil gets mixed in for extra flavor. Then, layer the tomatoes on top of the tart and bake until the cheese is warm and the crust is golden brown. The smell is intoxicating, I'm warning you. For best results, allow the tart to cool slightly before attempting to cut into it. Serve alongside a light salad or sides of your choice. This tart makes for a yummy brunch or main dish…you choose! 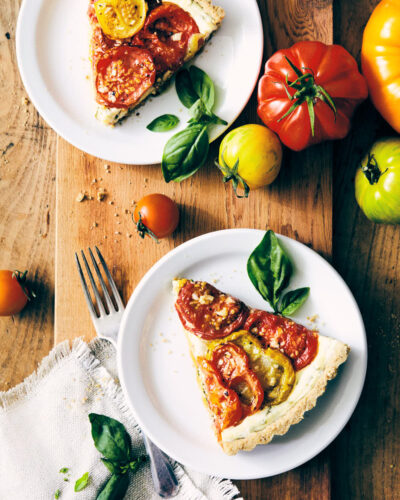