My grandma is the baker in the family. Whenever we pay her a visit, I always know to expect three things: vintage Tupperware full of cookies sitting in cupboard, an epic dessert tray sitting in the fridge, and heaps of back-up pies stashed away in the freezer. It's like clockwork. After all these years, the chocolate mint cookies still go in the green Tupperware container. And if you're craving butterscotch, check the orange one. While some say variety is the spice of life - when it comes to my grandma’s baking, I hope these rituals don’t change anytime soon.

All her goodies are baked with love. So much love that they even have this whole-grain-loving-processed-food-avoiding person (hi!) digging into. Because, life. Of all her desserts, my absolute favorite are these addictive squares made from graham crackers, a tangy whipped cream cheese center, and a sweet layer of fruit on top. There's something so delightfully simple about it. Yet, it's glorious in every way. A perfect childhood dessert that I'll clearly never grow out of.

I was flipping through one of my recipe folders last week, and I stumbled across the recipe I’d copied down for these "Magic Cherry Squares". It's written in my elementary school handwriting, and I'm pretty sure the "magic" part was my own addition (although perfectly fitting). In contrast to its stark white page, the original recipe is written on a yellowed and wrinkled cue card. Stained from little drops of oil and sticky from sugar - a sign of hard earned battle scars after years in the kitchen. Mine isn’t nearly nearly as vintage. And frankly, it’s because I’ve never made it myself. For a moment I considered it was time to replicate this recipe  – with my own healthy twist. But I quickly decided against it, for fear of losing that “magic” that makes the recipe so special.

So instead, I decided to make a vegan cheesecake! It's a nod to my grandma's splendid dessert, but in no way an attempt to re-create it. And when something's this good – it should stand on its own. This cheesecake has a quick and easy crust that tastes deceivingly like graham crackers. And it's filled with a tangy and creamy filling that even my dairy-loving grandparents’ would love. The sweet, vibrant strawberry rhubarb sauce is the icing on the (cheese)cake. It adds a bright, fruity element and it’s so good I've been eating it with a spoon – straight out from the jar.

If you've never had vegan cashew-based cheesecake before, you're definitely in for a treat. It's unbelievable how much this filling tastes like real cheesecake. Just 7 ingredients + a high speed blender, and you've made your own dairy-free cheesecake filling.

But let's talk about this crust. We’ve been eating our way through A LOT of cheesecake this week - primarily so I could get the crust just right. I wanted it to taste like graham crackers, but without copping out and  buying a box to chuck in the food processor. I've yet to find a brand of graham crackers with an ingredients list I'm pumped about, so I was determined to go the homemade route. For a hot second I was even considered baking gluten free and vegan cookies only to pulverize them in the food processor…but something just felt so counter-intuitive about the whole thing. That, and I'm lazy. Instead, this crust is made from a combination of oat flour and almond flour. Cinnamon, nutmeg and a final touch of some molasses takes the crust into graham-cracker-like territory. I started shipping off slices to my family (for fear I'd myself turn into a giant cheesecake), and they were shocked that the crust wasn't in fact crushed up grahams! Mission accomplished.

And this fruit sauce. It's beautiful way to celebrate the abundance of seasonal fruit that's starting to fill our markets. I chose a classic combination I love: bright red rhubarb and juicy berries. The cheesecake is great on its own – but I love it so much better with fresh fruit piled high and this fruity sauce drizzled on top. Because who can resist something as pretty as this? And since it's so simple to make, you kind of have to make it. 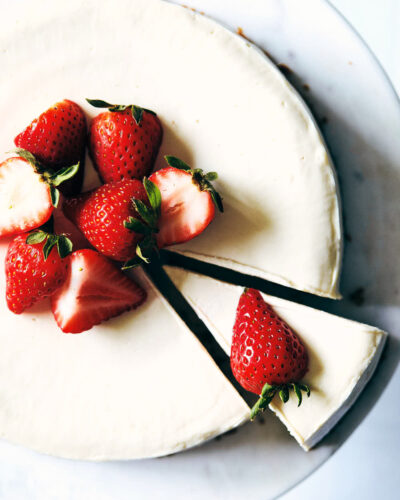