This pie is what dreams are made of. A chocolate hazelnut crust filled with creamy chocolate and topped with coconut whipped cream. You don't have to be vegan or gluten free to LOVE this pie.
Jump to Recipe

I have a mild obsession with coconut cream pie, and it's only gotten worse after this recipe. It started as a test recipe I did for my mom's birthday a couple months ago. She's not a huge fan of decadent desserts or chocolate for that matter (yes, those people exist, apparently). But she does love coconut, and I love all three – so I figured I'd give this one a whirl. In the worst case scenario, it meant Anguel and I would have a whole pie to ourselves. And, at least we wouldn't need to feel too bad about it because mom doesn't really like dessert anyways. Well, thankfully this pie turned out to be a hit - and guess who was leading the charge? Mother dearest. Apparently she likes this coconut cream pie. Or at least that's what I think she mumbled as she crammed the last bite in her mouth before serving herself a second piece.

My mom's been begging me to post this recipe for the past couple months, but I'd been waiting to try it out a few more times before sharing it on the web. Lucky for me it meant many more slices of this delicious pie. Too. many. slices. I stopped tweaking after the second version, but made two more batches "just in case". As a form of self preservation, I'm publishing this recipe now so that I can no longer rely on "recipe testing" as an excuse to justify eating pie for breakfast (ahem, this morning… and yesterday). Take that as a sign that this pie is simply too good not to share.

Not only does this dessert look stunning, but it's also vegan and gluten free – which makes it a great choice for serving to a crowd. Because there's nothing worse than staring at a dessert but not being able to eat it. I've also served this pie to many friends and family who are so far from having "dietary restriction" in their repertoire - and the consensus was a solid yum all around. Since this is a refrigerated dessert, it’s a great recipe to prep in advance. Just bake the crust and pour in the filling. It can set in the fridge overnight and then all you need to do is piled whipped cream on top before serving. It's been saving my butt this holiday season.

The crust for this pie is downright delicious. The flavors remind me a bit of nutella (chocolate and hazelnut), with some added yum for the shredded coconut flakes. And it's so foolproof to make - it almost feels wrong. Press-in crusts are my go-to when it comes to vegan and gluten-free baking, because they allow you to stick to healthy, minimally processed ingredients like nuts and oats.  After a quick mix in the food processor, simply crumble the mixture into a pie pan and press it in with your fingers. A quick bake in the oven and you're ready for filling.

The texture of this pie is remarkable, especially considering it doesn't use any dairy products. The blended cashews and coconut milk create a creamy, decadent filling. I wanted the chocolate cream filling to be soft enough to impart that pudding-like texture we all love, but firm enough that it can be served in sturdy slices. Chocolate coconut cream blobs aren't cute, no matter how delicious they taste. When it comes to a thickening agent, arrowroot does the trick here. Much like you may have done with cornstarch or flour, you can combine arrowroot with a liquid to create a slurry. Once gently heated, the slurry will thicken up your mixture. It's as easy as pie (ha!). Make sure to be diligent in whisking your chocolate cream filling. Constant whisking is important to ensure you end up with a smooth, creamy filling. No clumps allowed. If you don’t have arrowroot powder on hand, you can find it in the health foods or gluten free section of your store. Look for pure arrowroot (i.e. no cornstarch) – and it may be labeled as "arrowroot powder" or "arrowroot flour". Both work.

Now, you could stop at the crust and filling, because it would totally be impressive enough. But in the spirit of going all out, this pie is then topped with a luscious layer of coconut whipped cream. Since this pie is decadent as it is, I usually stick to just one batch of coconut whipped cream. But, if you really want to go crazy with the whipped cream, consider doubling it. Toasted coconut flakes are completely optional, but if you have time to toast some up, I highly recommend it!

This pie is what dreams are made of. A chocolate hazelnut crust filled with creamy chocolate and topped with coconut whipped cream. You don't have to be vegan or gluten free to LOVE this pie.
Prep Time 20 minutes
Cook Time 20 minutes
Total Time 40 minutes
Servings 12
Author: Bri 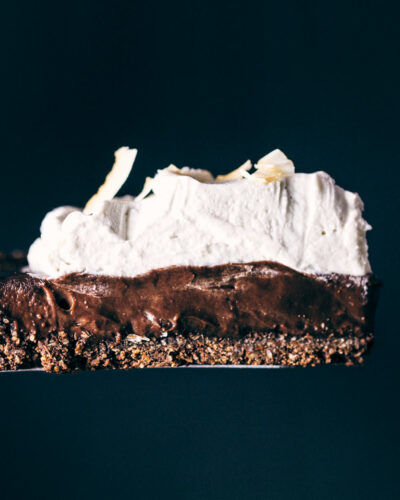