Anguel doesn’t ask for much, but when he wants something, he really goes for it. Take the past few weeks for instance. The dude’s been on my case to develop a new dessert recipe. He asks, and he asks often. Like, every single day. Not kidding. At first, I gave him some sass (exactly like this). But eventually I caved, because who can say no to dessert?

Coming up with a new dessert recipe, on the other hand, requires a lot of trial and error. Sure, it usually turns out alright the first time around. But nobody wants to be just “alright”. And Anguel’s caught onto this by now. When he asks for a new recipe, it’s not because he’s bored of his favorites (like this, this and this). Nope, he just happens to know exactly what kind of rabbit hole comes with a new recipe: one that’s filled with many do-overs and plenty of kitchen scraps. Luckily, this dude’s sweet tooth is gladly waiting on the other side.

After a couple weeks of testing, we’ve now eaten so much cheesecake that we’re pretty much one bar away from turning into cashews. And if you’re unsure why testing a cheesecake recipe requires copious amounts of cashews, then spoiler alert: this version doesn’t actually contain dairy at all! Rather, the creamy filling is made from cashews and coconut cream. A squeeze of lemon juice gives this “cheesecake” a classic tang. It’s a magical combo that’s every bit as luscious as its dairy-packed counterpart.

Beyond the creamy cashew cheesecake filling - there’s still so much more to love. These bars feature a super simple nut and oat crust that tastes kinda like graham crackers. Honestly, I had a bit of a head-start with this recipe since I started with a variation of this yummy cheesecake recipe I shared on the blog a while back. But this time around, the crust is a bit softer, which works better for these bars. I also adjusted the ratio of cashews and coconut cream to allow the filling to set up in the fridge instead of the freezer. You’ll still need to keep them refrigerated before serving, but they won’t need as much time to soften which means eating ASAP.

And let’s not forget about the topping. The fact that cranberries were on mega blow-out at the store was exactly the incentive I needed to add a third (but easy) layer to this dish. In hindsight, it’s the perfect festive touch. But on a side note, I still can’t explain why someone who spends a small fortune on her monthly nut supply is motivated by saving a couple bucks on cranberries (heh), but anyways...The luscious fruit topping comes together in a cinch: cranberries (I used frozen), orange juice and a small glug of maple syrup to balance out the naturally tart berries. The end result is a perfectly balanced fruity topping which makes these bars dangerously addictive, trust me. 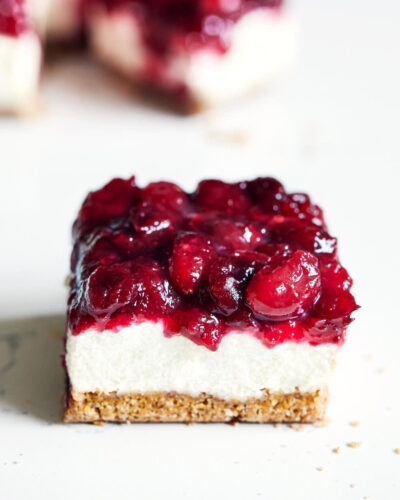