I’m bundled up in my thickest socks and have no fewer than two blankets wrapped around me. The wind is howling outside and the rain is pelting our windows. It’s been like this for a couple days now. By the time it’s over, Vancouver will have had three storms rip through the city in a single week. And while nobody gave our cats a heads up, they can clearly sense it: both Taro and Forrest are on high alert, posted at the living room window with their tails wagging furiously.

It’s safe to say, we’re staying in this weekend. And besides furiously reading this for bookclub on Sunday, I plan on spending most of my weekend doing rainy-day things. Stuff like watching movies with the fireplace on, baking and eating (of course). I’m not quite sure what I’ll be whipping up baking wise, but I definitely know I’ll be digging into one (or two) of these veggie pot pies.

Nothing says comfort food like a piping hot pot pie that’s fresh out the oven. It’s the perfect warm hug on a chilly day. The filling's like a hearty stew - and to top it off, you get a crispy, savory crust on the top. Up until recently, I wish I could say we had pot pie on the regular. But to be honest, the whole crust thing really threw me for a loop. Don’t get me wrong: I love a good crust here and there. But a good roll-out pastry crust takes time - and not to mention it’s typically loaded with gobs of butter and white flour. Not my kind of casual weeknight dinner.

To get the best of both worlds (pot pie + weeknight sanity), I’ve started making my pot pies sans crust. Before you start freaking out about losing a critical part...do know I’ve replaced it with a “crust” of golden potatoes instead. I was inspired by the scalloped potatoes dish I made for our annual Friendsgiving recently. Because if there’s one thing I would swap crust for, it would be layers of crispy potatoes.

For the filling, I like to use a hearty combination of veggies: carrots, mushrooms, leeks, kale, potatoes and peas. Given that pot pie is usually “chicken pot pie”, I wanted to include a plant-based protein that wouldn’t distract from everything else going on. Chickpeas are the perfect addition. They not only add protein, but also a bit of extra texture. And they retain their shape and firmness after a trip to the oven. In short, chickpeas fit right in. I use canned chickpeas, but you could also cook your own from scratch. If using the canned kind, make sure you rinse them thoroughly before adding to the mixture.

It goes without saying that the filling can be tailored to your tastes. Don’t have any leeks on hand? Add a bit more onion instead. Don’t feel like kale? Try spinach, or skip the greens (nobody’s looking). One substitution I wouldn’t recommend is swapping out the fresh thyme. Thyme adds a ton of flavor to this dish. So while I know it can be annoying plucking off 1 tablespoon of fresh thyme leaves...I promise it’s worth it!

I’ve been making this recipe using 6 mini-ramekins, but it would probably also work with a single baking dish. The amount of potato slices required for the “crust” will vary slightly based on your cooking vessel. I like to ensure I have 1 pound of baby potatoes set aside when making this (aim for ones the size of large golf balls), but it never hurts to have a bit extra just in case. Leftovers can be refrigerated (covered) and re-heated until warm the following day. 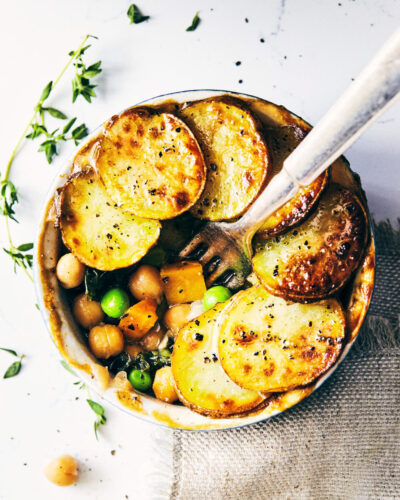