This nourishing soup features watercress, one of the world's most nutrient-dense foods! Potatoes make this soup extra creamy. Topped with crispy shoestring potatoes for crunch.
Jump to Recipe

Soup. Soup. Soup. And potatoes. That's what I've been up to. The drab Vancouver weather has continued, but I'm not letting it rain on my parade. Figuratively at least, because fact check: it is definitely raining outside. When it rains like this, I usually try to ignore it. I'll walk places without an umbrella – and ignore the watermarks that stain my glasses after drying. And ignore the frizzy hair…but that's usually a given. Yesterday evening I started to walk to the bus station after a ladies' night dinner, but took about three steps before my cousin offered me a ride. I caved. And it was a wonderful, short trip. Warm and cozy to be exact. Which brings me to this soup.

In the winter, soup is one of my go-to meals. It's like a hug in a bowl. One that I can eat with a spoon, while curled up on the couch with the fireplace blazing. Better yet, it's easy to make soup in large batches – fridgeable hugs you can come back to whenever in need. With all the soups I've been cooking up this winter, this is the one that has been making it to the dinner table most often. It's creamy (without actual cream), silky, satisfying and best of all, it's packed with nutrients! And, it has potatoes, which I love (clearly). In fact, potatoes make it into this dish twice: in the soup and as a crispy garnish sprinkled on top. You'll probably need to hide these crispy shoestring potatoes until the final minute, otherwise there's a real danger they end up as snack casualties, straight from the pan. Because really…who turns down crispy, seasoned potato shoestrings?!

The key to this soup is watercress. Ever had it? Watercress is a cruciferous vegetable, and related to cabbage, cauliflower and mustard greens. They're sold as edible shoots with a slight peppery flavor. Watercress is most often eaten raw; but it can also be cooked, which tends to yield a much milder flavor (i.e. less peppery-ness).

It makes me sad to see watercress relegated to an occasional garnish on a restaurant dish, because this leafy green is destined for much bigger and better things! Why? Well, first off, watercress is one of the most nutrient dense foods out there. Like even more than spinach. Yup, you heard me right. The watercress in this soup alone will provide you with approximately 200% of your daily vitamin K needs, and 50% each of your vitamin C and vitamin A needs. And get this, it delivers all that in a WHOPPING 8 calories!! As you'd expect, watercress kills it on the ANDI guide (stands for "Aggregate Nutrient Density Index"), which scores foods based on their nutrient content. The score reflects a food's nutrient-per-calorie density, and considers things like minerals, vitamins and antioxidants. Watercress scores 1000 points. That's a perfect score, right up there with kale (see other scores here). So if we're all hot and heavy over kale, why can't we share a bit of the love with watercress? After you try this dish, I'm sure you'll wholeheartedly agree.

This soup should be ready in about 45 minutes or so. And that includes the crispy shoestring potatoes. The base of the soup is made from just about ten ingredients, most of which you probably already have at home. Potatoes help to thicken the soup – making it smooth and creamy, without a lack of dairy. And the herbs and spices add an extra layer of flavor. Complementary but not overpowering. The mild curry powder adds a bit of je ne sais quoi to the soup – but it’s entirely optional.

Watercress is best used fairly quickly after it's bought, so aim to make the soup within a day or two of bringing it home. It’s sold in bunches – and where I live, typically near the fresh herbs in the produce section of the grocery store. Not all grocers stock watercress regularly, but many do. And if not, a local Asian grocery store should be a sure bet. The crispy potato shoestrings are best served on the day of. Trust me, while you might be lucky enough stash some soup away for the next day…those crispy shoestring potatoes won't make it. It doesn't seem to matter how much I make, they always get polished off in minutes! 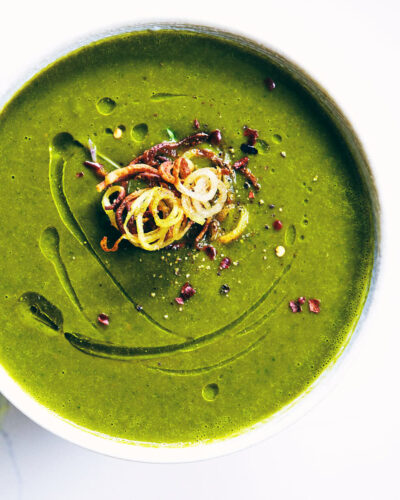