A plant based spin on Greek gyros! These wraps are bursting with flavor from the smoky “meat”, creamy vegan tzatziki, and fresh veggie toppings. Loaded with protein and easier to make than you’d think!
Jump to Recipe

When Anguel and I travelled to Greece, I was really excited to try all the food. Gyros were on the top of my list. However, what I (stupidly) didn’t think about was that most of the time...vegetarian + gyros is a non-starter. Duh. So when I saw a falafel-based version on the menu, I almost cried (happy tears). And while the falafel-based gyros were indeed delicious, texturally I craved something a bit firmer and meatier for my gyros experience. So, the wheels started turning on another way to put a plant-based twist on good ol’ gyros. And here we are.

When it comes to mock-meat, I’ll be the first to admit it’s not my daily jam. Store-bought mock-meats are usually stuffed with so many unpronounceables, I get tongue tied even trying to read the package. Also, they usually taste weird. And with so many creative ways to cook plant-based meals, mock-meat is often unnecessary...although it is nice to have the option. Especially when it means you can indulge in delicious foods that are otherwise inaccessible to the meatless crowd!

Seitan is a typical go-to when it comes to mock-meat. Sometimes referred to as "wheat meat", seitan is made from wheat gluten (the protein part of wheat). When kneaded and cooked, seitan becomes firm and surprisingly meat-like in texture. It’s pretty cool, I have to say. Especially when you consider how its origins are said to go back centuries to vegetarian Buddhist Monks in China. But stepping back, seitan is also basically a block of straight-up gluten, which can seem a bit like dinner overkill, you know?!

So, after much testing, we’re pleased to share a delicious delicious seitan-ish recipe. The base itself relies primarily on beans (cannellini, to be specific). Spices and seasonings, like smoked paprika, oregano and thyme, provide a punch of flavor. Then, a smidge of wheat gluten comes in to provide just the right amount of meaty texture. It’s a match made in heaven. From a nutrition standpoint, cannellini beans end up being a great pairing for the wheat gluten. While wheat gluten is extremely high in protein, it’s an incomplete protein, due to its general lack of Lysine (an essential amino acid). But you know what does have lysine?! Cannellini beans. Put them together and you get a complete protein. Yup, we got you.

Making the vegan gyros meat isn’t difficult, we promise. All you need to do is chuck your ingredients in a food processor, blend until smooth, then shape the dough into a rectangular log and wrap it in tinfoil. That part should take you all of 5-6 minutes. Then, the gyros meat will bake in the oven to firm up slightly, before getting sliced into thin strips. Baking will take you an hour, but you won’t have to hang around the kitchen. The timing happens to be perfect for catching your favorite show (or two). Once the gyros "meat" is cooked, we like to go one extra step by sauteing the sliced “meat” in a skillet pan quickly before serving. It adds a slight golden brown crust to the sides and ensures your gyros are piping hot when they hit the table.

As with traditional gyros, you should definitely load up on plenty of tzatziki sauce and all the fresh toppings. The recipe below links to a yummy vegan tzatziki sauce from the blog, but if you’d prefer a dairy-based version you can use the one in this recipe instead. Leftover gyros meat can be stored tightly wrapped and unsliced. Then simply slice off the amount you need the next day and give it a quick saute before diving in. 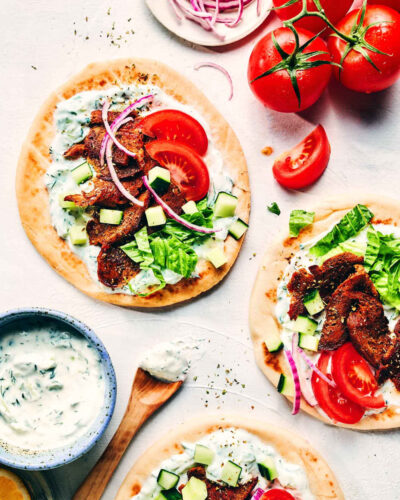