This easy vegan vodka sauce pasta (penne alla vodka) is the perfect weeknight dinner. It's bursting with flavor and made with simple pantry ingredients. Tastes just like the real deal—you won't guess it's dairy-free and vegan! (Gluten Free option)
Jump to Recipe 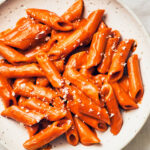 Everyone needs an easy weeknight pasta recipe. This vegan vodka sauce pasta (penne alla vodka) is perfect for when you're craving a cozy dinner, but don't want to go to the grocery store. This recipe calls for simple pantry ingredients like olive oil, garlic, onion, tomato paste—and pasta, of course!

The sauce is silky, creamy, and loaded with umami. The trick is cooking down tomato paste until its caramelized and dark red. This step tempers the tomato paste's raw flavor, to create a deeply flavorful and savory sauce. What we love most about this recipe is that it tastes just like the real deal, even though it's completely vegan and dairy-free. We make this yummy pasta often—and think that you should too!

Why you'll love this recipe

This vodka sauce pasta is flavorful, saucy, and super creamy!

You'll need less than 10 ingredients to make this flavorful vegan vodka sauce pasta. And, you may already have most of these ingredients in your pantry!

How to make (step-by-step photos)

It's easy to make this vegan vodka sauce pasta. Here are the steps to make it:

What does vodka do in vodka sauce?

Vodka helps enhance the flavors in the sauce, primarily through aroma. At low concentrations—like in this vodka sauce recipe—"the alcohol enhances the release of fruity esters and other aroma molecules into the air" (source). Adding vodka to vodka sauce pasta results in a delicious, balanced sauce.

Can I make vodka sauce without vodka?

You could make vodka sauce without vodka—but it won't have quite the same flavor. In a pinch, you can substitute white wine (which has a lower alcohol content). Or, if you don't consume alcohol, you can use vegetable stock instead. That said, in this sauce, you can't really taste the vodka—and much of the alcohol content evaporates—so if you can, we highly recommend following the recipe and adding vodka.

What to serve with vegan penne alla vodka?

Vodka sauce pasta is quite satisfying, so you can definitely enjoy it on its own. That said, you could serve penne alla vodka with: Vegan Caesar Salad, Pesto Pea Spinach Salad, or garlic bread.

Check out these other pasta recipes: 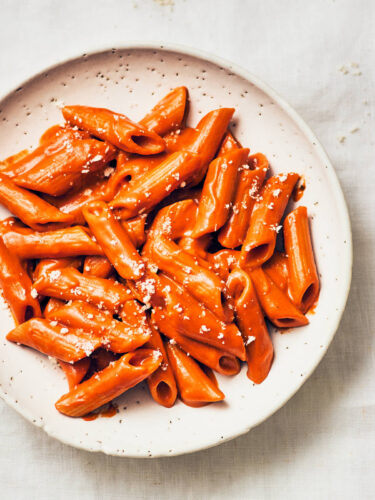