×
Home » Breakfast » Guava and Strawberry Chia Pudding Parfait
This creamy chia pudding features a refreshing combination of strawberries and guava. The guava strawberry puree can also be spooned onto yogurt, added to smoothies, or eaten straight off the spoon.
Jump to Recipe

When it comes to grocery shopping, you're either a list-maker or a risk taker. List makers are the organized ones among us - those who enter the store on a clear mission each time. These people get what they went in for. Then there's the risk takers. Those who eschew the list and just make decisions on the fly. Grocery shopping for a risk taker can be like Russian Roulette. Most of the time it'll turn out fine – but other times it’s a complete fail. You'll go into the store needing one item, but come out with ten (and none of them being what you actually needed). Unfortunately for us, my list game is definitely poor. This doesn't really pair well with my tendency to buy all the things. Anyone need an extra bag of oats? We have three. And since our cupboards are all within an inch or two of shutting (and not in the right direction), we could really use all the help we can get.

But as annoying as my grocery shopping habits might be, there's definitely times when winging pays dividends. Like last week, when I was meandering through the produce aisle, and got stopped dead in my tracks by the scent of… tropical paradise. I traced it back to a basket of ripe guavas, which I knew I absolutely had to have. At the time I had no clue what I'd do with them…but I'd figure that part out later. In the end, I forgot the bananas and almonds I originally came for, but meh. I had guavas.

Chia seed pudding probably isn't new to you. Mix these magical seeds with nut-milk, vanilla and a bit of sweetener and ta-da, you've got yourself a healthy vegan pudding! But despite all its amazing qualities, straight up chia seed pudding doesn’t have quite enough going on to keep me totally satisfied. I need toppings. Fun, colorful stuff. Things like this thick and luscious guava and strawberry fruit puree, which can be generously layered with the pudding. And swirled in at your heart's content. To keep with the tropical theme, I added fresh mangos and shredded coconut on top. It’s a delightful combination and I think you’ll really enjoy it.

The guava and strawberry fruit puree is so delicious that we're just polishing off our third batch of the week. It’s definitely the star of this chia seed pudding parfait, but it also goes well in a variety of other things. Like swirled into yogurt, blended into a smoothie, or straight out of the jar (which is how I'm currently eating it). Guava on its own has that sweet and slightly sour flavor profile that's common in other tropical fruits, like passion fruit. The flavor is undeniably exotic. The guavas I used were the yellow kind – small, almost golf ball sized fruit with a whitish-yellow interior. Some verged on the palest shade of pink, but nothing like the variety with bright pink flesh like I'd seen in Hawaii. In any case, they still smelled intensely of guava – and the taste also lived up to my expectations. I imagine you could also use different types of guava for this recipe, but the most important thing is that they're ripe! The addition of the strawberries helped boost the natural sweetness, and turned the puree into a beautiful shade of pink.

To make the fruit puree, you'll need to cook down the guavas for 30 minutes. Once the guavas are soft, simply strain the puree through a fine mesh sieve. You'll want to spend a good five minutes mashing the guava about to ensure that you extract as much fruit as possible. Only the hard seeds should remain. Then, the thick guava puree goes into a blender with strawberries, the beans from a vanilla pod and a bit of sweetener. I used brown rice syrup in this recipe, but you could easily substitute for your liquid sweetener of choice. Keep in mind that brown rice syrup is ~20% less sweet than regular sugar, so just make sure you're adjusting to taste.

When I make this recipe, I like to prep the puree and chia seed pudding the night before. I let them set in their own containers overnight, and then combine in the morning. Top with freshly chopped mango and shredded coconut. Extra servings can be stored in the fridge for a couple days, either assembled or not. It's the perfect grab-and-go breakfast for busy weekdays. And, while I label this recipe as breakfast, it would definitely work equally well as a sweet treat or a healthy dessert. 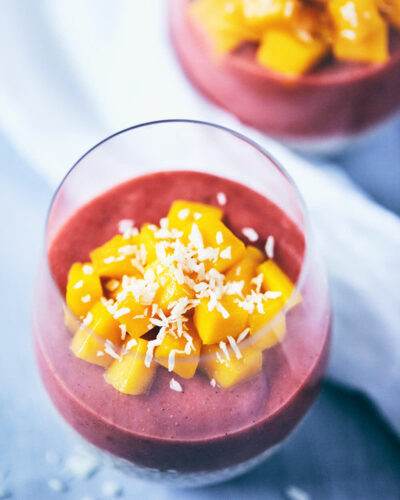