×
Home » Breakfast » Mushrooms on Toast
Perfectly seared mushrooms stacked on top of creamy white bean spread. This simple, yet mouthwatering dish works for breakfast, lunch, snack or even a low-fuss dinner. So versatile you’ll find yourself making it again and again!
Jump to Recipe

I’m slowly becoming more of a morning person. Trust me, nobody is more surprised than yours truly. When it comes to mornings, I realize it’s the little things that count. Like getting to bed at a semi-reasonable hour, preparing breakfast/lunch the night before, and stocking a line-up of podcasts for the drive into work. In fact, I think I actually kinda love mornings.

Well, that was until a Monday morning almost made me take it all back. It started as a typical day. Wake up before the sun, hit snooze for another five (okay, ten) minutes before slipping out from under the down covers and crawling out of bed. Cat #1 was sleeping on the foot of the bed, and #2 was tucked comfortably in the nook of Anguel’s arm. I remember being a bit jealous. I got ready in my standard 15-20 minute window (benefits of not owning a hairbrush), grabbed my favorite green smoothie and headed out the door.

It was less about 10 minutes later that I found myself pulled over on the side of the highway, with a warning light intensely flickering on the car’s dashboard to tell me that I’d been hit. As if the big “boom” from the car slamming into my rear bumper wasn’t enough of a tip-off (but thanks anyways, Mazda). On impact, my green smoothie ejected from the cup holder, which meant I now had a full liter of green swamp water both sliding down the front AND back seats. It looked like Shrek had both thrown up and then imploded. Until this day I would have sworn that you’d never regret a green smoothie. But when I looked the big green puddle in the front passenger seat, I couldn’t help but cry.

Thankfully, it could have been much, much worse. I’m still a bit shaken, but the car has been fixed up and I’m back to morning smoothies. Unexpectedly, I now find myself tensing up anytime a car comes close...but I’m hoping this is something that’ll pass over time. Needless to say, with the past week’s emotional roller-coaster, the last thing I felt like doing was spending time in the kitchen.

When I don’t feel like doing much cooking, I always default to simple favorites like this mushrooms on toast combo. It’s simple, yet so satisfying. And while it makes a good breakfast or snack, it also makes a great dinner - especially if you can’t muster up the energy to do much else. Quality bread, creamy white bean spread and golden brown mushrooms. This is one of those recipes that remind you that often simplest is best.

This is recipe pretty much doesn’t need a recipe. Mushrooms are the star of the show, so pick ones you’re really excited about. I like to use a variety of wild mushrooms to get  different flavors and textures into the mix; but if you’re committed to one type, just go for it. I used a mix of chanterelles, shiitake, oyster and whatever else was available at the market.

The trick to cooking a good mushroom is to heat up a heavy skillet pan with oil. I like to spread the mushrooms out in a single layer and let them develop a golden brown crust before flipping them over to cook the other side. A bit of garlic at the end adds extra flavor without cooking so long it burns (ick). And then it’s time to spread an extra generous portion of creamy white bean dip over toasted bread. This white bean spread is an oldie but a goodie - and takes just a handful of ingredients. It’s the perfect lemony complement to the mushrooms, as long as you don’t eat it all with a spoon beforehand. Garnish with a bit of parsley if you wish, otherwise just serve as is. And with that: cheers to being grateful for the simple things in life. May we never forget them. 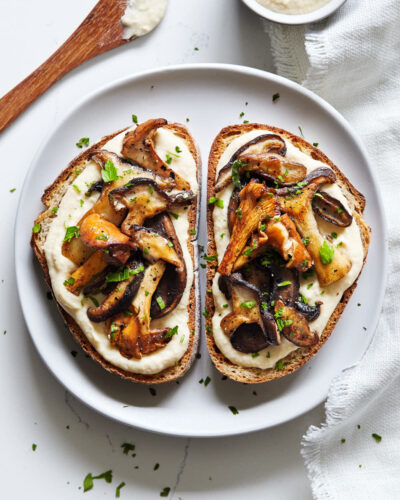