Lately, we've had this vegan chickpea noodle soup on repeat. We don't have the sniffles, but the nourishing leek, ginger, and turmeric broth would also be perfect if you have a cold. The crisp veggie and herb toppings are a departure from a classic chicken noodle soup—but this dish would certainly hit the spot when you're craving a comforting, feel good noodle soup.

This easy chickpea soup is chock full of nourishing ingredients, including:

How to make vegan pasta soup

This soup is one of our go-to weeknight dinners in the fall and winter because it's so easy to make. All you need to do to make this hearty pasta soup is:

Everything gets cooked in one pot, making clean up a breeze. We also like cooking everything together so that the chickpeas and noodles both get a chance to absorb the delicious flavors from the golden turmeric soup broth.

We recommend ditalini noodles for this chickpea noodle soup recipe. Ditalini noodles are shaped like small tubes. They are named after "little thimbles" for their resemblance to sewing thimbles.

If you can't find ditalini noodles, you can substitute them for another small pasta shape, such as:

Remember: Cook times vary depending on the size and shape of the pasta noodle. If you are substituting the ditalini for a different kind of noodle, adjust the final cook time accordingly! 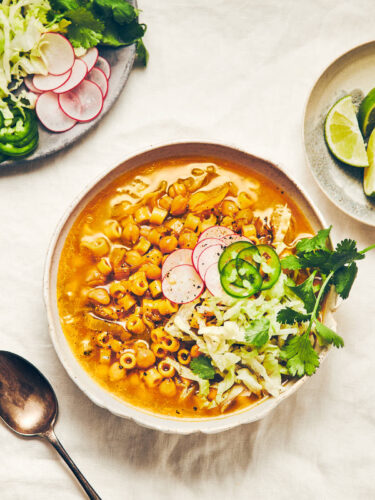