This healthy vegan soup is made with protein-rich red lentils and fresh vegetables, like carrots, potatoes, and leafy greens. Fire-roasted tomatoes add depth of flavor. Serve this easy red lentil soup on its own or with a side of bread. It's perfect for soup season!
Jump to Recipe 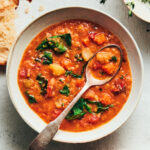 This vegan red lentil and vegetable soup is exactly what you need on a chilly day. It's full of healthy veggies—like carrots, celery, and leafy greens—but also feels cozy and comforting thanks to the potatoes and silky red lentils. This soup is easy to make and cooks quickly. We love to make a big pot at the beginning of the week, so we can reheat the soup for quick weekday lunches and dinners.

This vegan red lentil soup comes together with mostly pantry ingredients. Some of the key ingredients for this soup are:

Of all the different kinds of lentils out there, we choose red lentils when we're short on time. Red lentils cook quickly: usually in about 15 minutes. When lentils are cooked in acidic ingredients, it can take longer for them to soften. I like to keep the cooking time down by adding the acidic ingredients at the end, after the lentils have softened. That's why, in this recipe, the fire-roasted tomatoes are added after the lentils are soft. Then all you need to do is bring the mixture up to a boil to let the remaining flavors meld.

Red lentils are a source of protein, iron, and folate (source). If you're looking for a delicious (and inexpensive) plant-based source of protein, red lentils are a great option! Red lentils are considered an incomplete protein, because they don't contain all the essential amino acids. But don't worry—if your diet includes whole grains, the combination will make a complete protein. While you don't need necessarily need to pair them in the same meal...it is a good excuse to serve some crusty bread with your lentil soup!

Red lentils are well suited for soups—like this vegan red lentil soup and our Curried Pumpkin and Lentil Soup recipe. But, you can also use red lentils in places you don't expect it—like these healthy gluten free & vegan Morning Glory Breakfast Muffins. If you have other creative ways to cook with red lentils, we'd love to hear about them!

This recipe makes a big batch, so we usually refrigerate extra soup in an airtight container. You'll likely need to thin the soup the next day, either with a bit of vegetable stock or water. The soup can be reheated on the stove, over medium heat, covered with a lid.

This soup is freezer-friendly. When freezing a soup like this, we'll usually hold off on adding the tender greens until it's time to eat. If you'd like to do this too, then make the recipe as directed for everything except adding the Swiss chard. Then, stir in the Swiss chard when you are warming the soup to eat. But, this is personal preference and you can definitely freeze the soup with the greens if you prefer!

There are many methods to freezing and defrosting soup. We like to let the soup cool, then transfer it to a freezer bag and freeze it on its side so it's as flat as possible. We find it defrosts faster and stays nice and organized in the freezer. But again, do what works best for you.

To reheat frozen soup, let it defrost (either in the fridge overnight or in a cold water bath). Transfer soup to a pot and reheat on the stove.

This healthy vegan soup is made with protein-rich red lentils and fresh vegetables, like carrots, potatoes, and leafy greens. Fire-roasted tomatoes add depth of flavor. Serve this easy red lentil soup on its own or with a side of bread. It's perfect for soup season!
Prep Time 5 minutes
Cook Time 30 minutes
Total Time 35 minutes
Servings 6
Author: Bri 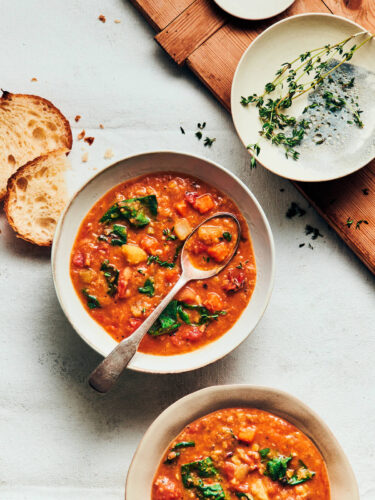 Check out these other soup recipes: