This comforting Vegan Chicken Noodle Soup tastes like childhood, but without the chicken. No packaged "meat" substitute required, thanks to shredded seasoned mushrooms! You'll be surprised at how deeply flavorful the broth is, without needing to simmer away for hours. (Gluten Free option)
Jump to Recipe 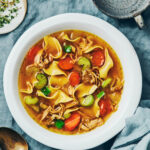 Chicken Noodle Soup is a childhood classic. There was nothing better than mom making a big pot of homemade soup during cold and flu season. Since giving up meat, we'd never found a Vegan "Chicken" Noodle Soup that quite hit the spot. A great chicken noodle soup has a depth of flavor that can be hard to replicate with a quick-cooking veggie version. But after lots of testing, we figured out how to make an intensely flavorful Vegan Chicken Noodle Soup—without hours of simmering! This version has the flavors and textures of what we remember from our childhood (minus the real chicken). And, dare we say it's even better!

This soup has a deep, well-developed flavor that comes from browning onions; and then bolstering a quality vegetable stock with garlic, herbs, and veggies. Rather than using a store-bought chicken "meat" alternative, we use shredded mushrooms—tossed in tasty chicken-inspired spices. It looks surprisingly like shredded chicken, don't you think? This soup comes together in just over 45 minutes, and leftovers might be even more delicious the next day!

Why you'll love this recipe

This delicious vegan chicken noodle soup is made with healthy, whole ingredients. You won't need any specialty packaged vegan "meat"—just veggies, seasonings, and some noodles for good measure!

How to make (step-by-step photos)

There are 3 main parts to making this recipe: preparing the mushrooms, cooking the soup, and cooking the noodles. Here are the details on how you make this Vegan Chicken Noodle Soup:

How much bouillon per cup of water?

Brands vary, so check the package for conversion instructions. When using Better Than Bouillon, we add 1 teaspoon of bouillon concentrate (paste) for every 1 cup of water. (Note: This uses slightly less paste than their package would suggest, but we find it plenty flavorful and salty at these levels). If using a bouillon cube, we usually use 1 cube for every 2 cups of water—but again, check the package as brands vary.

King Oyster mushrooms have a light, delicate flavor. On their own, they don't really taste like chicken. But, this recipe seasons the mushrooms with spices that are often used on chicken: sage, celery salt, and black pepper. The result is seared mushrooms that look like shredded chicken, seasoned with chicken-inspired spices, and that tastes savory and delicious. We think you'll love it!

Which part of the leek do you use?

Yes, you can freeze it. If freezing, let the soup cool after cooking, then transfer it to freezer safe bags or containers. We recommend cooking the mushrooms and pasta fresh the day you're eating it. But, you could also cook the mushrooms, then add them back to the cooled soup and freeze together. This recipe keeps the noodles separate from the liquid, to prevent the noodles from swelling, so we do not recommend freezing the noodles with the soup.

Check out these other soup recipes: 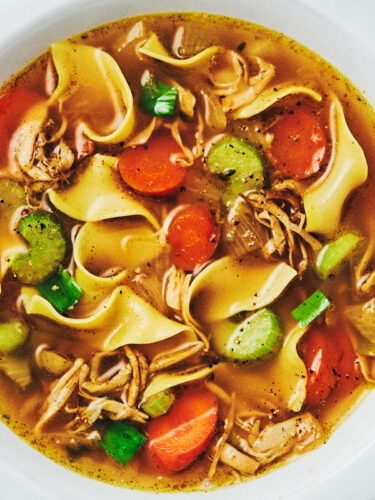