×
Home » Sides » Maple Sriracha Brussels Sprouts
Mix up your holiday routine with these delicious maple sriracha brussels sprouts. The crisp oven roasted brussels sprouts get tossed in a maple glaze with just a hint of spice. Sprinkle with toasted sesame seeds for an extra pretty finish.
Jump to Recipe

During the holidays, vegetable-based sides often look tired. Tired from being boiled to oblivion, and tired that they weren’t given much more love than a pat of butter and a sprinkle of salt. It’s a fact I’m intimately aware of, because as a vegetarian, holiday dinners are often made up entirely of sides. So, with the holidays around the corner, I felt like it was time to get cranking on at least one epic side dish. Something that the non-meat eating peoples can devour as well. Selfish? Perhaps. But trust me, everyone is going to like this one.

Brussels sprouts are a staple during the holidays. Sure, you can boil (or steam) them. But back to what I was saying about tired looking vegetables...well, I encourage you to dream bigger. Roasted brussels sprouts are da bomb, because the roasted brown bits on the edges mean a lot of flavor. Often times brussels sprouts are done up with plenty of bacon or roasted plain. It feels like a bit of an unfair choice, so here’s my version of a saucy-not-so-boring way to roast up your brussels sprouts.

Most of this recipe reads like any tried and true approach for roasting brussels sprouts. Start with a hot oven, add your halved brussels sprouts on the pan, and toss with oil. Then, we start to play. Once the brussels sprouts are nearly cooked, you’ll toss them in a simple sauce made of two ingredients: maple syrup and sriracha. It might seem like a weird mix, but the sweet and slightly salty combo is a match made in heaven. I literally had to make a second batch in the middle of photographing them, because Anguel and I couldn’t stop ourselves from snacking.

You can mix up the sauce directly in the pan, it doesn’t need to be fussy. I’ve made these a number of times, and prefer them best when the coated sprouts go back in the oven for a little while longer. The heat helps the sauce get bubbly hot, and if you’re lucky, some of the maple syrup that’s dropped onto the baking sheet will begin to caramelize. The recipe below, reflects this method. You should serve roasted brussels sprouts hot, because that’s when they feel the crispiest. If you’re tight on oven space and need to roast them in advance, I suggest pulling them out of the oven while they’re still somewhat tender on the inside. Then, right before serving, coat them in the sauce and quickly put them in the oven to finish. If I remember, I’ll sprinkle the sprouts with toasted sesame seeds. They’re a pretty finishing touch and go with the sriracha vibes, but if you’re hosting a ton of people over for dinner and happen to forget, these sprouts will be just as delicious.

A note on spice: I personally don’t find sriracha super spicy, so would describe these brussels sprouts to be on the sweeter side than anything - but use your own tastebuds as a guide. If you choose to cut back on the sriracha, be prepared to use more salt to season as sriracha has salt in it too. 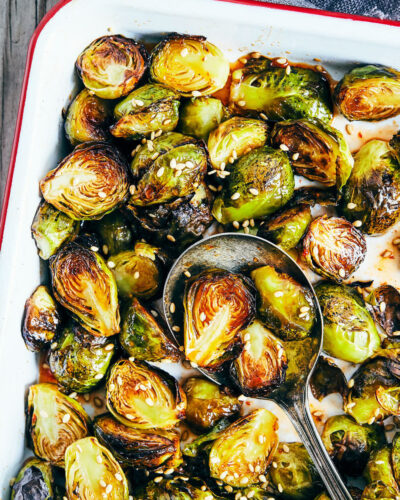