This delicious spicy edamame recipe takes less than 10 minutes to make. It's made with toasted sesame oil and Schichimi Togarashi (Japanese 7 Spice). You can make it as spicy as you'd like. Serve this high protein dish as an appetizer, side, or snack. (Vegan, Gluten Free)
Jump to Recipe

Why you should make this recipe

Edamame might be something you forget about until you're at a sushi restaurant. But it's so easy to make, you should enjoy it at home more often! Frozen edamame is quick cooking, extremely versatile, inexpensive, and high in protein.

This spicy sesame edamame has saved me on more occasions than I can count. It's salty, spicy, and finger-licking good. Speaking from personal experience, here's when you really(!!) need to make this edamame recipe when:

Edamame is often served sprinkled with salt. I like to jazz it up by tossing the edamame pods in toasted sesame oil, Shichimi Togarashi (Japanese 7 Spice), sesame seeds, and salt. All it takes is 5 ingredients to make this recipe!

What is Shichimi Togarashi?

Shichimi Togarashi (Japanese Seven Spice) is a highly versatile Japanese spice blend. It's made from chili, sesame seeds, citrus, seaweed and a few other savory ingredients—usually 7 ingredients total! Growing up, we always had a small glass shaker bottle of Schichimi Togarashi in our cupboard. It's delicious sprinkled on soups, noodles, rice, and basically anywhere you want to add spicy umami seasoning.

You can buy Schichimi Togarashi at most well stocked grocery stores—otherwise head to your closest Asian grocer. It's often packaged in a small glass bottle with a red lid. Or, if you prefer, you could also make your own homemade blend. Some brands are spicier than others, so taste as you go and add in small increments. It's always easier to add more spice than to take it out!

How to cook frozen edamame

Frozen edamame from the grocery store has already been partially cooked (blanched), before getting frozen and packaged. So at home, you really don't need to cook frozen edamame for long.

We recommend the boiling method for cooking frozen edamame. Bring a large pot of salted water to boil, then add the frozen edamame pods and cook until bright green (4 to 5 minutes). If you're cooking shelled edamame (just the beans, no pods)—then budget even less cooking time. If in doubt, read the package instructions. But, be wary of instructions that tell you to boil edamame for much longer than 5 minutes—it isn't usually necessary and they'll get mushy when overcooked.

To season the edamame, this recipe calls for tossing the hot drained edamame in toasted sesame oil, Schichimi Togarashi, toasted sesame seeds, and salt. The whole process takes less than 10 minutes to make—and the combination is delicious!

Often we'll serve a big bowl of this spiced edamame and let guests have at it. We're always surprised at how quickly it disappears! Here are some other ideas for how to enjoy this sesame spiced edamame:

Yes, edamame beans are young (immature) soybeans. They are soybeans that have been harvested when they are tender and still green. Edamame are often sold frozen in pods, but they are also available shelled (removed from the pods). To prepare edamame for eating, they are usually quickly boiled or steamed for less than 5 minutes.

Soybeans that are left to ripen turn into hard dry beans, usually yellow in color. To prepare mature soybeans for eating, they are usually boiled for many hours and sometimes fermented.

What can I substitute for coarse salt?

We love the crunchy texture of coarse salt on top of edamame. If you don't have coarse salt, the next best substitute would be flaky salt. Otherwise, you can substitute with kosher salt or sea salt.

How do I eat edamame in a pod?

The pod itself is fibrous and tough—it isn't usually eaten. To separate the beans from the pod, hold one end of the pod between your index finger and thumb. While holding the end, put the rest of the pod in your mouth and use your teeth to slide the beans out of the pod. You'll taste the flavors of the seasonings as you do this! Discard the empty pods in a small bowl.

This delicious spicy edamame recipe takes less than 10 minutes to make. It's made with toasted sesame oil and Schichimi Togarashi (Japanese 7 Spice). You can make it as spicy as you'd like. Serve this high protein dish as an appetizer, side, or snack. (Vegan, Gluten Free)
Prep Time 2 minutes
Cook Time 5 minutes
Total Time 7 minutes
Servings 4
Author: Bri 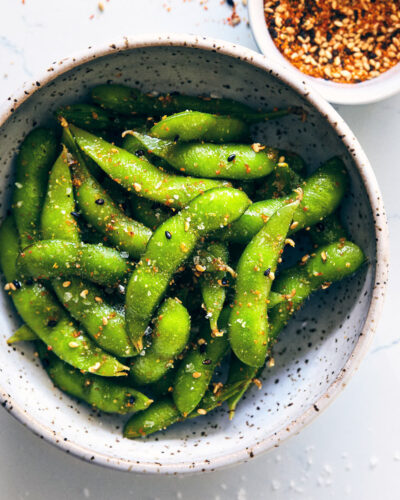 Check out these other Asian inspired recipes: